Last night, I sat at my dinner table in Ramallah, Palestine, sharing a meal with Palestinian, French, and North American friends.

We were discussing the different ways human and animal rights issues are perceived. Specifically, how social justice looks in the complicated context of an overall conservative Palestinian society, at least when compared to the more urban, progressive, and international city of Ramallah.

Like most of the world, younger and older generations tend to clash over opposing worldviews. Millennials in Ramallah are significantly less religious than their grandparents, are increasingly independent of the family-centred society, and are significantly more likely to drink alcohol, have premarital sex, and be open to divorce.

Yet in Palestine, there is an additional complication that conflates these expressions of independence─ as well as women’s rights, animal rights, and gay rights─ with colonialization and the normalization of Israel’s occupation of Palestinian communities.

Hi – my name is Danielle, and I am a Euro-American woman approaching the end of my 20’s, who has been living in Palestine for a year-and-a-half. I teach music here to young people and I am mostly conversational in Arabic, which is important if you want to live here long-term. I am also very involved in the Palestinian Animal League and am helping them host the first-ever animal rights conference here in Palestine next month.

Yet in many ways, I still feel that I am an outsider here in Palestine. Every conversation I have, especially the deeper more philosophical debates, I have with a Palestinian requires me simultaneously navigating the layers of being a “white” foreigner from a country who has significantly aided in Israel’s continued occupation of Palestine.
What’s more, I identify as someone who is non-religious, a feminist, vegan, an animal rights activist, and an environmental protection advocate. These identities can often make someone outspoken, trying to convince others to heed the urgency and legitimacy of promoting respect towards all peoples and species.

But for me, I am always trying to tread lightly, to try and listen more than preach.

Take, for example, a discussion I’ve had many times in Palestine about spaying and neutering street animals. Most Palestinians gasp in horror when I tell them that I spayed my cat or if I were to say that I believe it is the best solution for curtailing significant street animal overpopulation. For most Palestinians, they respond that it is “haram,” forbidden because it’s like playing the role of God to prevent an animal from reproducing.

Yet, there are very few people who speak out against the local municipality when they send sterilizing teams into the community to set poison traps for street animals, killing them slowly and painfully.

For me, this is an obvious hypocrisy –the solution should be to advocate for more public education about the spaying and neutering of animals as a preventative measure against animals suffering.

But when I often face indirect accusations that this is against the religious beliefs of people here, or that because I’m an outsider then I cannot understand, or that it’s a waste of time and energy to help animals here when even the people don’t have basic human rights under Israeli occupation, what can I possibly say in response?

I ask myself: Does them being right about those points then make me wrong for trying to help?

Should I feel guilty for sharing my beliefs with others here?

Am I perpetuating “white saviorism”, am I subconsciously trying to “civilize” the Arab world as my colonial ancestors have attempted for centuries?

Or, in this context of Occupied Palestine, should I be focusing only on human rights, not animal rights or environmental protection?

Fortunately, working with organizers in the Palestinian Animal League has taught me a lot about navigating these issues. A common conversation topic is the “cycle of violence”, which refers to how people become “dehumanized” through recurring humiliations and degradation of living standards when experiencing a military occupation. This “dehumanization” often translates into the need of that person to control or dominate something else, as a way to regain some control and authority in their desperate situation. This can take the form of children bullying others, parents hitting their children, men abusing their wives, or children throwing stones at small animals in the street. PAL recognizes this pattern and focuses on not waiting for the occupation to end before attempting to build a just, equitable, and sustainable society.

Since living here, I’ve also learned about a new term called “pink-washing” or “vegan-washing”, combining “pink” or “vegan” and “whitewashing”. For more about this, read this article from the Palestinian Animal League.  It is referring to the complicated matter when Israel describes itself as a champion of gay rights, women’s rights, and veganism while simultaneously ignoring their daily human rights violations against the Palestinian people (as well as to queer people, women and animals inside Palestine too). As a foreigner, I certainly feel an inner-struggle at times about this phenomena, about how much easier it is to be vegan in Israel than in the West Bank (because of the large meat-alternative industry), or how I’m comfortable to wear shorts and skirts in Jerusalem but never in Ramallah because of the more conservative culture here, or how the only large-scale animal shelters are on the other side of the separation wall from me in Israel.

Yet I also know countless Palestinian men and women who are fighting for the intersecting rights of all sentient humans and non-human beings, fighting too for the life of our planet. And sometimes these Palestinians are silenced by the older generations, and those who wish to cling to the past because they are afraid of losing the traditional ways – a very real occurrence considering the efforts of Israel to extinguish Palestinian culture and thus Palestinian resistance.

I don’t know. I do know that they are fighting simultaneous battles—a desire to protect, defend, and rejuvenate Palestinian culture, while also ensuring that their society continues to progress and change and grow along with the rest of the world. And I do know these voices are getting stronger in Palestine each day.

As a foreigner, I will never truly understand what it is to be a Palestinian in all of its complexities.

For this reason alone, I feel that as an activist for animal and human rights here, my role should be that of one who listens first, supporting my progressive Palestinian colleagues who understand far better than I how to navigate the terrain of Palestine’s cultural identities. 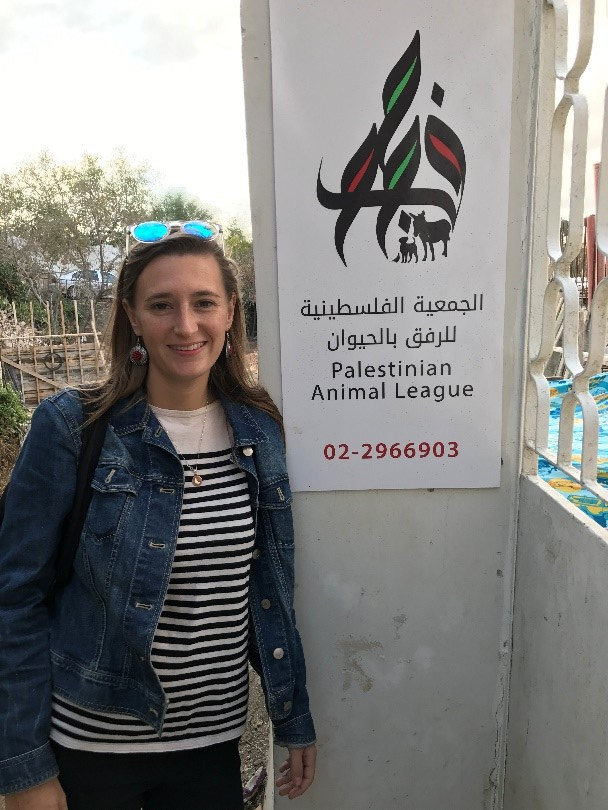 Danielle is a multi-instrumentalist, composer, conductor, and educator who uses experiences she’s had around the world to shape her music, inspire new projects, and fuel cross-cultural arts collaborations. Her passion to use music as a tool for social change has led Danielle to describe her role in the world as a “Musician for Peace.”