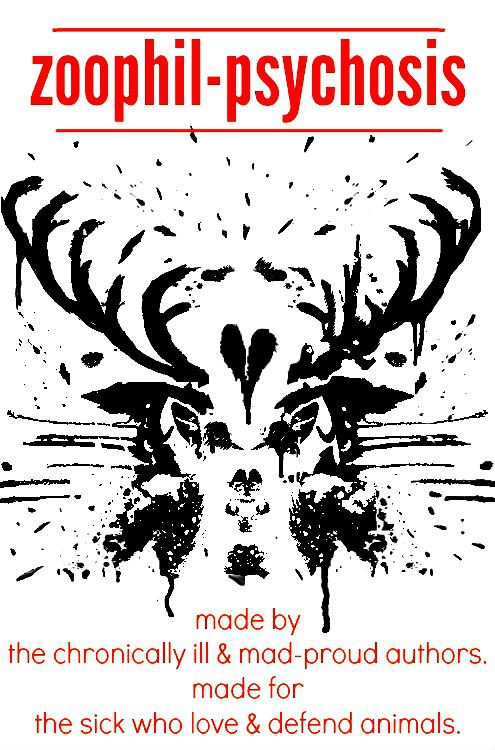 this zine is currently available in English & Arabic & English-Audio.

all the writers, artists, and activists who contributed, Vollkommen Hayllie for providing Arabic translation, Alexandra Hummel for providing German translation,
and Halfmoon Research for accessibility consultation.

zoophil-psychosis is available by donation.
you can download the zine below for free.
if you would like to donate to help pay for the cost of producing the zine, please do so here:

THANK YOU & TAKE CARE OF EACH OTHER.

does that word means a romantic/sexual love of animals…?

~~~~~~~~~~~~
shorter answer:
no, it does not!
ZOOPHIL-PSYCHOSIS was a clinical diagnosis made up by the animal testing industry in 1909, to stigmatize and discredit campaigns opposing vivisection as “crazy” and “sick”.
the word describing a sexual attraction or sexual activity with animals is ZOOPHILIA.
~~~~~~~~~~~~
longer answer:
“ZOO” is from the Greek zōon (ζῷον), and means “ANIMAL”, which we see in other words like “zoos” (those animal prisons), “zoophobia” (fear of dangerous animals), and zoology (the scientific study of animals).
“PHIL” is from the Greek philia (φιλία), and means “LOVE”, which we see in other words like “philosophy” (love of wisdom), philadelphia (city of brotherly love), and philanthropy (love of humans).
“PSYCHOSIS” is again from the Greek ψυχή/psykhe/psyche (mind) and -ωσις/osis (a process or state; an abnormal condition), and arose as a term to distinguish disorders which were thought to be disorders of the mind, as opposed to neurosis, which was thought to stem from a disorder of the nerves. 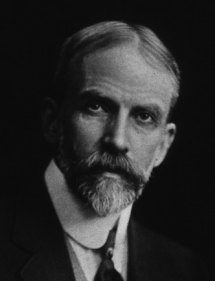 sooo put those 3 words together, and it means “psychotic love of animals”. because “zoophilists” was understood to mean a *platonic*/non-sexual/non-romantic love of animals, this was a word animal advocates openly and positively applied to themselves in the early 1900s.
but when zoophil-psychosis was created by Charles Dana (pictured below) – a vivisectionist (doctors who test on animals) – it was sensationalized by the media as a way to label the womyn leading animal rights protests as mentally ill – and so not to be listened to. and the oppressive medicalization of identities is nothing new, unfortunately.
this term was propaganda to discredit & slandered activists, describing empathy with animals as a dangerous mental disorder. they wanted the public to think this wasn’t political but was an illness.
and the intention with naming our zine after this propaganda term is essentially about draw attention to this exploitation of mental health stigma as a means to further stigmatize animal advocacy while gender policing the womyn who challenged male power.
perhaps we can go so far as to “take back” that label, and not be ashamed of having loving-empathy for non-humans?
but ZOOPHILIA means something very different.
“ZOO” means “ANIMAL”, as already explained above.
“PHILIA”, however, coming from the Greek φιλία/philía, means an “unnatural attraction” to something. so you can see it in other terms like pedophilia (attraction to prepubescent children) and necrophilia (attraction to corpses).
sooo put those words 2 words together and it can be understood to mean a sexual fixation on animals.
*** of course, ZOOPHILIA is animal abuse for many obvious reason. it is effectively crimes against nature and should not be tolerated in any degree. ***