so this post is about eating, and how it relates to mental illnesses and disorders.
i am aware of how taboo subjects like eating disorders are, but then again so is mental illness & so is animal politics – and neither has stopped me from speaking my mind.
so why not mix all of these taboo topics together and see what happens??

okay but seriously – as we get into this, i’d like to remind y’all about that disclaimer above, especially in how it talks about content warnings for triggering material, and about practising active self-love whenever you try to dive into traumatic or just confusing conversations (like this one right here). you already deserve honest credit for reading some of this, because you are trying to educate yourself to do better for you and others – and that is really rad.
remember that this writing here is meant to help and not hurt, so do me a favour and be extra nice to yourself please 🙂

so, why is this stuff so taboo? is it taboo simply because we don’t talk about it, and because we don’t talk about it then it becomes taboo all over again?
why is it discouraged for us to talk about our problems, in whatever way they manifest themselves into our lives? why is vulnerability and struggle discouraged when we all seem to value things like courage and honesty?
i think it is because we have all been bullied by society into perceiving things like someone asking for help as someone being vain & wanting attention (as if wanting attention was a bad thing too?). that, and we’re taught too to understand illness as a danger to be feared – and so identifying as sick can scare people away.
because social norms tend to encourage repressing so much of ourselves (and to channel that frustration into how we interact with others and ourselves), people have little to no experience talking about this stuff. so when someone brings it up, like me right here or if you’ve ever tried to do, then other people get real uncomfortable and respond awkwardly by saying something inappropriate. maybe they change the subject, or maybe they try blaming you, or say something implying that you not actually sick.

okay then, so eating.
for some people, whole ritual of eating is no big deal.
and when i say the “ritual”, i’m thinking about choosing what food to eat & when, about the act of spending money on food, about the process of preparing a single meal, and about the stuff after involving cleaning and digesting everything (both physically and mentally).
but for some other people, like myself, this ritual of eating is actually a very complicated relationship that can become a struggle to manage and cope with.

however, i honestly think that a lot of people struggle with food & eating.
because food is a really powerful thing.
we tend to eat every day, maybe more than once and maybe with other people.
we do it at all big life events to celebrate or commemorate something.
and we do it in a rush before work or school and we do it when we’re hungry but exhausted at the end of the day.
we do it to comfort our bodies, to treat our taste buds, and to nurture our health. or we do it in response to fat-phobic, body-shaming bullying fed to us by the media.
and sometimes we do it simply to get calories so that we can keep working as we try to pay down debts and bills.

for vegans, you’re most likely well aware of having very emotional, spiritual and political connections to what you put in your body, and what [who] you don’t.
i know i remember being rudely introduced to veganism in a very traumatizing way that involved watching a bunch of animals die with the slogan “your money, your fault”. that was 6 years ago, but it was still widely upsetting for a white privileged sensitive persyn like myself to experience in a particularly vulnerable time in my life.
but it doesn’t take a columbo to discover the countless number of blogs & books & documentaries that inform you about how much food is layered with a lot more than just taste (think sexual politics. think gentrification. think colonial appropriation. think child slavery. think environmental destruction. think migrant worker racism. think species-based violence.)

and so i say disordered eating, as opposed to eating disorders, because

so to understand disordered eating, it is basically engaging in some of the same behavior as those with eating disorders, but at a lesser frequency or lower level of severity.
but it is still can be dangerous and so needs to be taken seriously.

i persynally find that sometimes, in certain situations and depending on how many spoons i have left that day, these identities can be empowering for myself and where i am at currently. empowering because i can find communities that share my struggles, even if not exactly the same way. and empowering because it is a big relief to me to see that there is nothing wrong with me as a persyn, but rather that there are symptoms of illnesses that are a part of me  (just the same as there are other folks who may suffer more with things physically).

but some people may refer to this disorder eating by another name called eating disorder not otherwise specified (EDNOS) (more on that here), which is essentially some kind of eating disorder that does not meet the criteria for either anorexia or bulimia – so the disordered eating either has mixed features of both, or is just some extremely atypical eating behaviors that are not characterized by either.
for more on the variety of different disordered eating & eating disorders, click here.

so disordered vegan eating.
i think that being a vegan who struggles with some degree of disordered eating can be extra difficult – and for 2 really legitimate reasons.

if your curious to know more, some symptoms of disordered eating, otherwise know as “abnormal” attitudes and behaviours towards eating, include:

as far as i’d be comfortable sharing right now on this blog, i can say that i tend to simply not eat for long periods of time. not for any reason of fearing weight gain (which my male-representing privilege affords me), but because things like how my appetite tends to be often absent (and so i rely on eating only a handful of simple familiar foods). 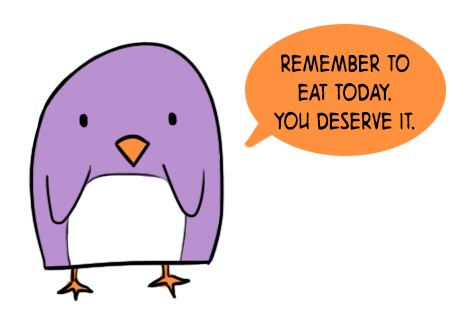 or its because of intrusive thoughts that make me relate to the ritual of eating as simply, albeit strangely, not a priority in my daily routine. and because of shitty things like capitalism, it’s hard sometimes to see food without seeing money spent, which can mean some days i feel the need to “work” for my food. weird, i know.

so what are some good strategies to help you manage whatever relationship you have with eating food?
well to be honest i am still working at that myself too, so i’m learning just as much as you are.

one good strategy that i like is learning to sometimes think less. as in, there isn’t always a need to put some much judgement into what you’re eating, or how much, or whatever.

mindful eating is one.
this is is about the way we eat, not what we eat.
essentially, it is a zen practice of learning to pay attention as we eat.
and so instead of putting food into your mouth almost unconsciously and not really tasting the food you’re eating, here you work at paying attention to your thoughts, feelings, and sensations as you eat.
so you’re looking to pay attention to:

finally, try to read more, to find learned lessons from others, and community.
here are some good ones to get you going:

annnnd i think that is about all i have to say right now.
i hope it helped!